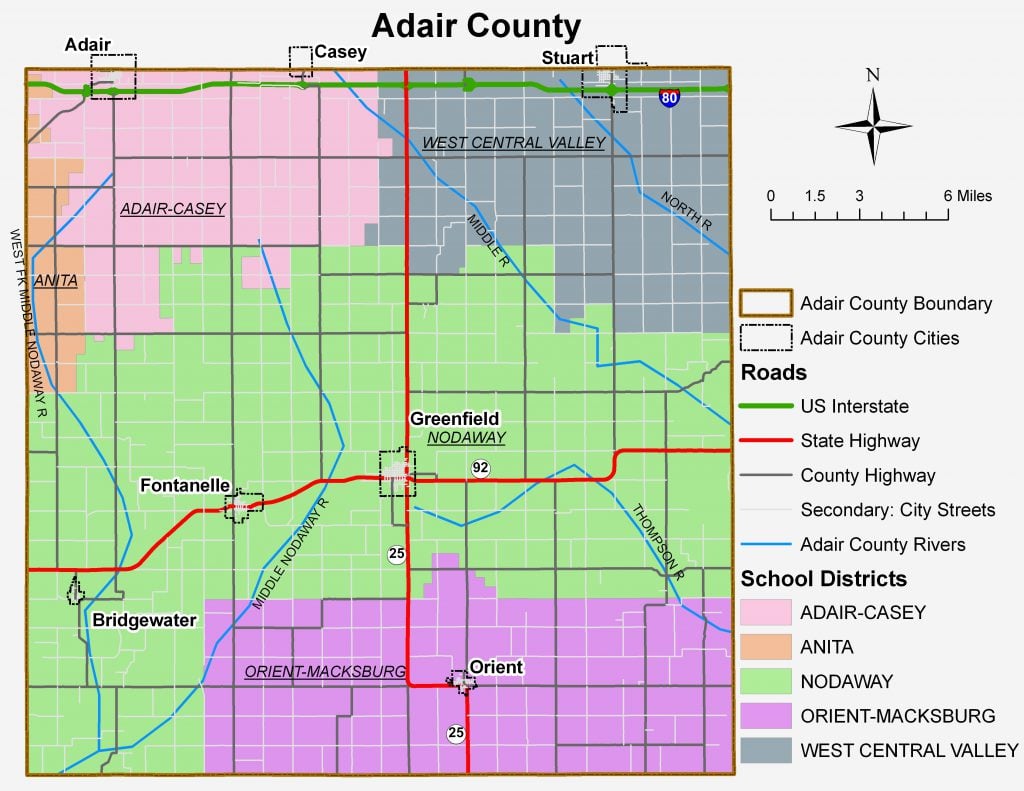 Adair County was established in 1851, and named for John Adair, General during the War of 1812 and 6th Governor of Kentucky. Summerset (now Fontanelle) was selected as the county seat in 1855. The first courthouse was built a year later. Native lumber and hardware were hauled by wagon from Keokuk for the building. The building eventually burned down in 1910.

During the Civil War, the people were ok with the idea of Fontanelle as the county seat, but at the end of the war it was brought to a vote. Changing the seat was defeated by seven votes. In 1874, more  than 200  men and 75 wagons made the trip to Fontanelle and, against the orders of the sheriff, loaded the records and furniture into their wagons and  returned to Greenfield. It surprised Fontanelle’s townspeople so much,  they didn’t resist.

On July 4, 1891, the  cornerstone of the present courthouse was laid. The building was completed in March 1892. It was originally adorned with a large square tower rising 100 feet mob, so he d id nothing. The following day General N.B. Baker arrived from Des Moines and persuaded  the people to  return the records to Summerset. About one month later, the  “county seat war”  came to an end when the court’s final decision moved  the county seat to Greenfield. (Source: Adair County)  (Picture Source: Iowatreasurers.org) 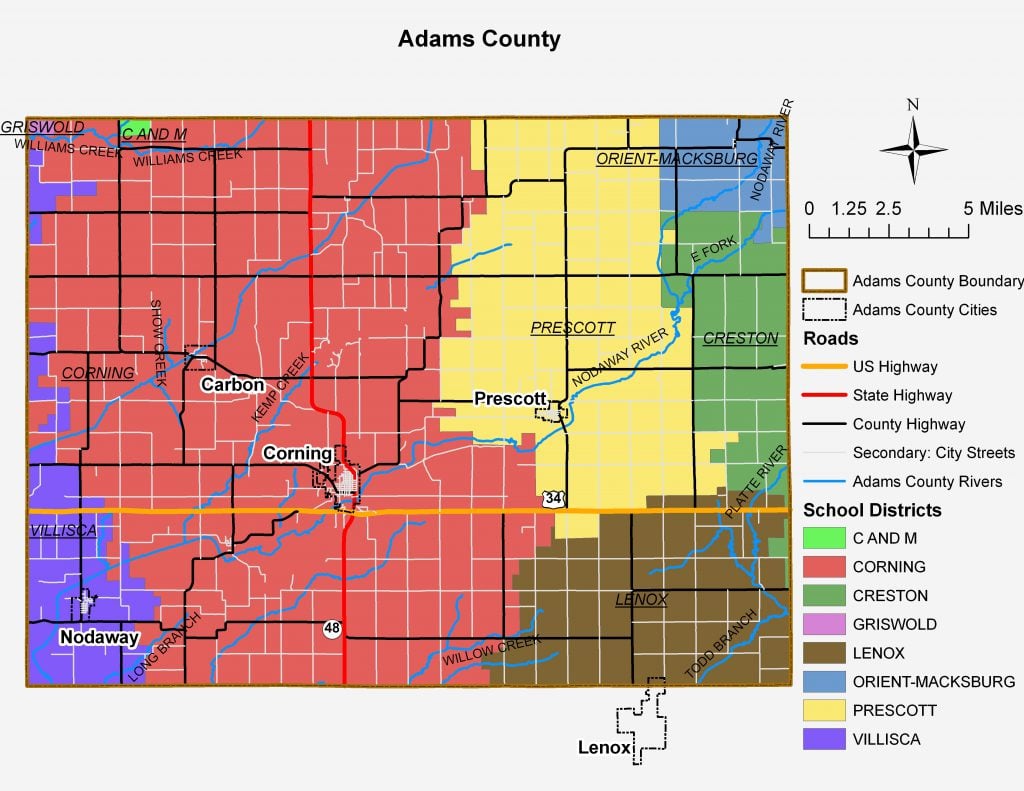 The first Adams County seat was established on January 12, 1853, at Qunicy (now nonexistent) Iowa. The courthouse was a frame building but official court records in private dwellings. The building was later used as a schoolhouse and in 1932 was torn down. In November 1872, the people voted to remove the courthouse from Quincy and name Corning the county seat. 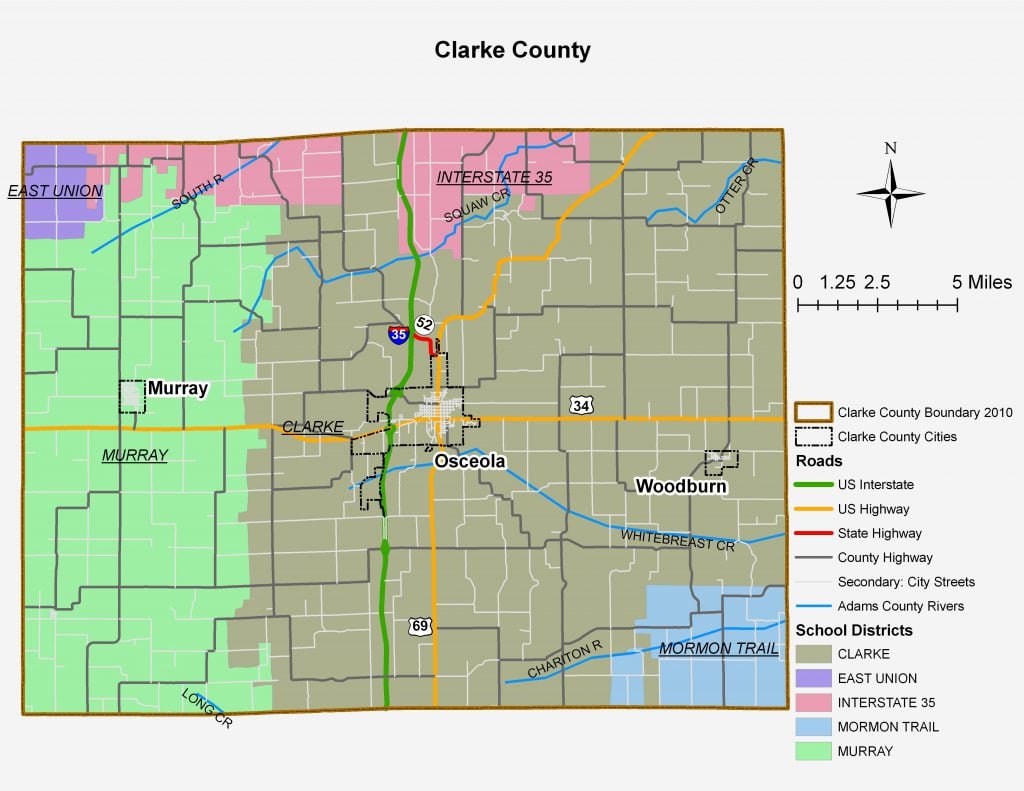 The first settlers of Clarke County were Mormons, who were on their way to Salt Lake City, Utah. None stayed for very long, as this area was seen as just a stopover for them on the Mormon Trail.

Clarke County is named after James Clarke, a territorial governor of Iowa. On August 8, 1851 three commissioners chose the site of the Clarke County seat, which became the city of Osceola. In 1854, a two-story structure was built to serve as the courthouse. The $1,600 building had to be abandoned in 1883 because of wind and weather damage.

The next courthouse was erected in the public square in 1892. Fifty years later the county outgrew the building and a $275,000 bond was issued for construction. The cornerstone of the new courthouse was laid in 1956. In just three months, the “L” shaped building was completed and it presently sits at the center of the business district in Osceola. (Source: Clarke County, e-referencedesk.com) (Picture Source: Wikipedia.org) 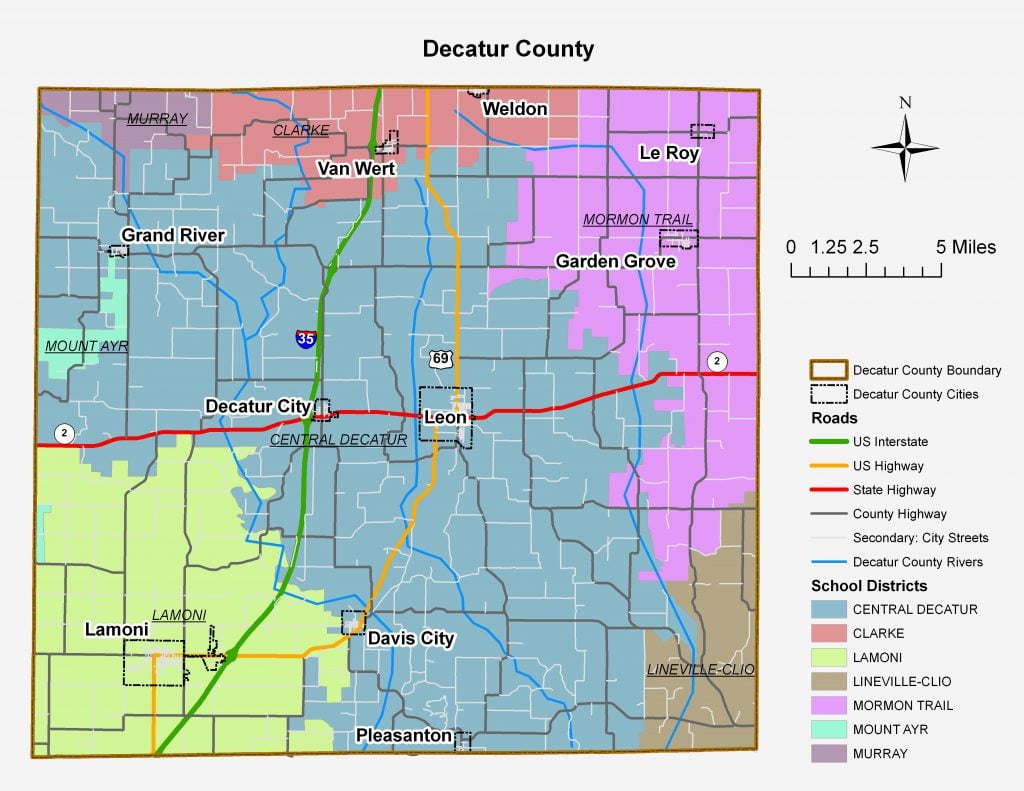 Decatur County was organized in 1850 and named for Stephen Decatur, a naval hero of the War of 1812. An area for the county seat was selected by the county commissioners and named it Decatur. The public objected, and prevailed upon the General Assembly to order a vote to establish a county seat. The majority vote in 1853 favored moving the county seat a few miles to the east and naming it Independence.

Citizens of Decatur refused to relinquish the county records, so the records were taken under cover of darkness to Independence with a wagon and a team of oxen. Later it was discovered that there was another town by the same name in Buchanan County. Decatur County then changed its county seat’s name to South Independence. In 1855, the name was changed to Leon.

The first courthouse was 20 by 22 feet and 14 feet high, made of logs and cost $375 in 1851. After only a few years, the crude log structure was outgrown and a new courthouse built to replace it. A new one was begun but a windstorm destroyed it before it could be finished. The next was razed by a fire on March 31, 1874.

After the misfortune of the previous courthouses, the people of the county were determined to build one which would stand more than a few years. Consequently, in 1875, at an approximate cost of $20,000, a brick courthouse was completed. Voters passed a resolution to build another courthouse in 1905. This time the courthouse was built of iron, steel, stone, tile, brick, marble and granite – completely fireproof and a safe place to keep valuable records. The structure, still in use today, was dedicated in 1908 and cost $70,000. (Source: Decatur County Development Corporation) (Picture Source: Iowacourthouses.org) 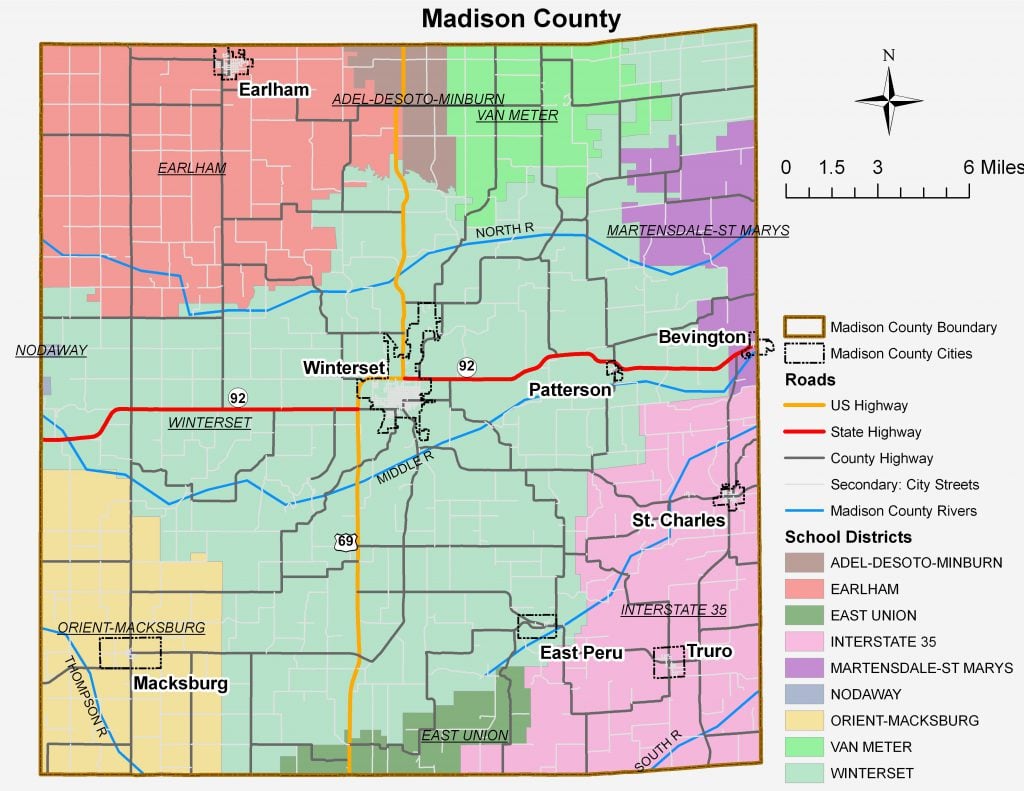 Madison County was organized in 1846 and is named after James Madison, the fourth President of the United States. Its picturesque terrain features an abundance of rivers and creeks. Originally boasting 21 covered bridges, six remain today with five being listed on the National Register of Historic Places.

Born Marion Robert Morrison in 1907, John Wayne began life in a modest home in Winterset. The home has been restored to its 1907 appearance with authentic furnishings, and features memorabilia such as the eye patch worn in True Grit. Guided tours are available daily. John Wayne-related items are now available for purchase at their site. Sales of products help support the John Wayne Birthplace Society.

The present courthouse is actually the second structure to reside on the site. The original courthouse was burned down in 1875. The second and present day structure is identical to the first structure and was built in 1876 and made of limestone. The Madison County Courthouse is listed on the National Register of Historic Places.

Jesse Hiatt was a farmer who discovered an unusual seedling in his apple orchard in 1872. He carefully nurtured the tree, and found its first fruit to be of a remarkable flavor. Originally named Hiatt’s “Hawkeye,” the apple was entered in the Missouri State Fair in 1893. Upon biting into the apple, one judge proclaimed it “delicious” and that name stuck. A descendant of the original Delicious apple tree still stands just north of Peru, and residents celebrate each year with an Apple Days festival. (Source: Madison County Chamber of Commerce) 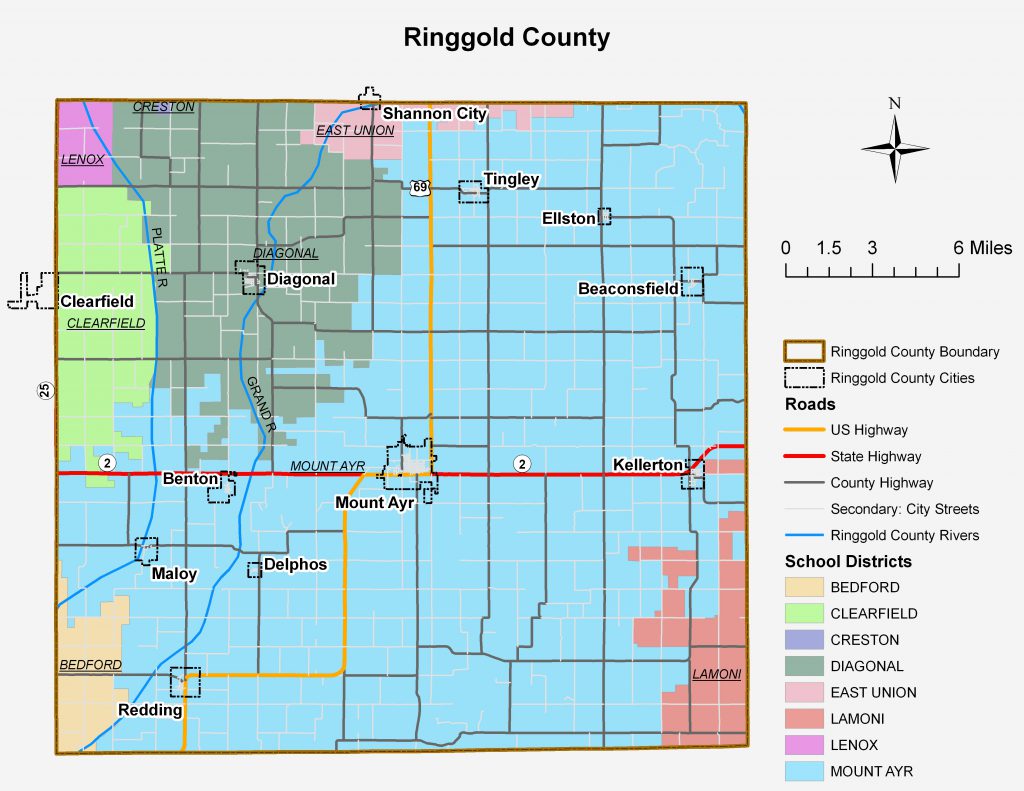 The teritory in Ringgold County was technically a part of Des Moines County from 1834 to 1836 under the territorial Governor of Wisconsin. In 1847 the boundaries of the county were established and the name of Ringgold given in honor of Major Samuel Ringgold, who was mortally wounded at the battle of Palo Alto in the Mexican War. Then it was attached to the newly organized county of Decatur. On April 18, 1855 the town of Mount Ayr was awarded the county seat.

The southern part of Ringgold County was involved in the famous dispute between Iowa and Missouri, which began in the autumn of 1839 and was not settled until 1850. The issue arose when two surveys had the state border settled about 9 miles apart. This issue was eventually sent to the United States Supreme Court in 1850 and was settled in Iowa’s favor. Posts were erected one mile apart, the entire distance between the two states. Every tenth post was to be an iron post 8 feet long, 4 inches square at one end, and 8 inches square at the other, to be set in the ground 3 ½ feet. At the top end of the post, on one side is the word “Iowa” and on the opposite side, the word “Missouri” and on the other two sides, the word “boundary” cast on the post. The wooden posts between these iron posts have long since rotted out, but iron posts can be found in Riley and Clinton townships.

The first courthouse in Ringgold County was a 14-foot square log building built in 1856.

In 1844 a large brick courthouse building was completed. This new courthouse lasted about forty years, and was eventually condemned as unsafe in 1921. (Source: Ringgold County) (Picture Source: flickr.com) 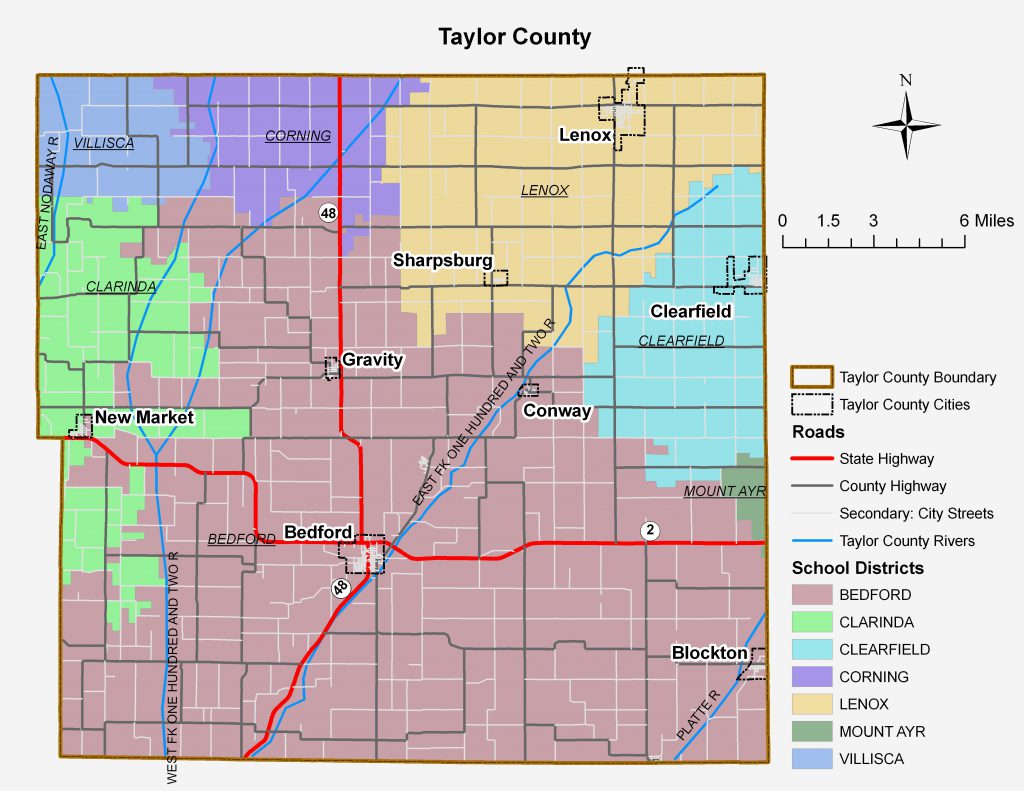 Taylor County gets its name from Major General Zachary Taylor, 12th president of the United States. The county was established in 1847. The first county elections were held in 1851, by order of the county sheriff. 53 votes were cast in the election of three commissioners, a clerk, judge, treasurer, and county recorder. The first county business conducted was the location of a county seat. Eventually the Legislature, on January 14, 1853, appointed a second committee to locate a new county seat after the first committee failed to do so. When a site was located, it was to be named Bedford.

In 1980, the Taylor County Courthouse was put on the National Register of Historic Places. In 1992, the Courthouse turned 100 years old. There were tours, music, demonstrations, food and fun to celebrate the occasion.

There are still many big beautiful trees and sidewalks lined with benches for anyone to sit and enjoy the peace and beauty of the courthouse and courtyard. Taylor County is very proud of their “Grand Old Lady!” 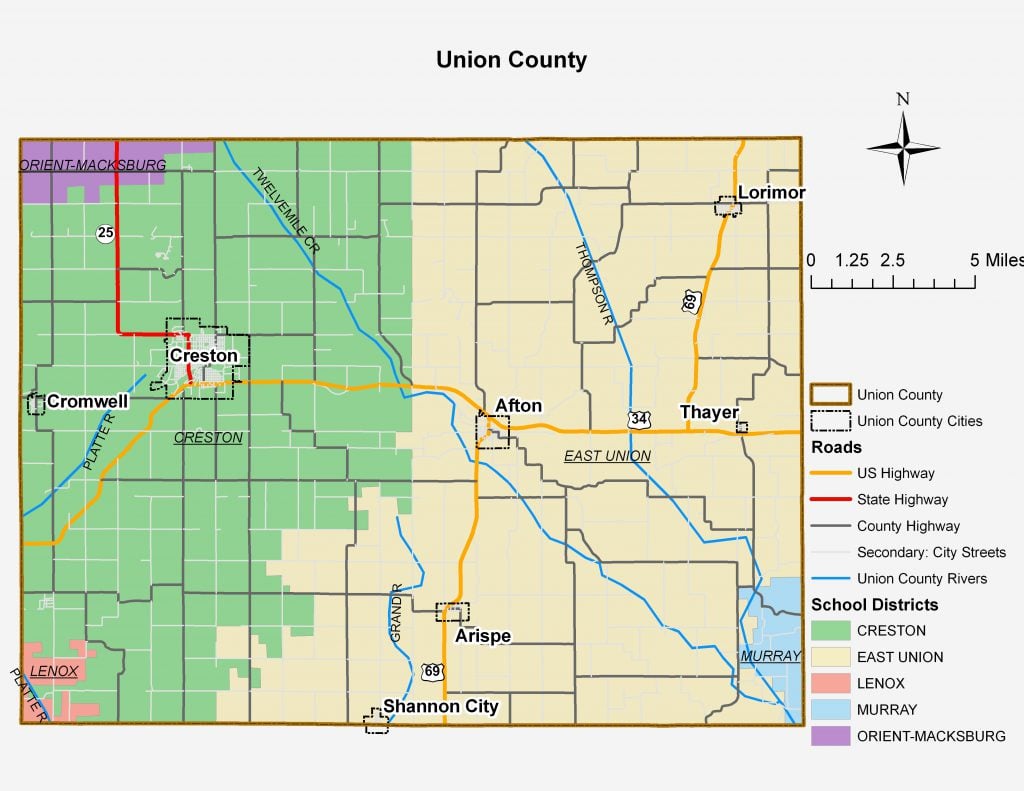 When Union County was formed, the struggle between the North and the South was at its height. When Iowa Legislators met the preservation of the Union was foremost in their minds, therefore the name of Union County was born.

The county was established in 1851. An election was held in Petersville on August 1, 1852, but it was not until February 15, 1855 that a county seat was selected. The site that was chosen was Afton. Two years later a two-story, frame courthouse was erected at a cost of $1,756. This building was also used as a church and a school.

The town of Highland challenged Afton for the county seat in an election. Afton remained the county seat, but by only 15 votes. Highland soon declined, and most of its buildings were moved to Afton.

Following this challenge the county constructed its second courthouse. This building was larger and more elaborate than the first. It was constructed of brick and was enhanced by a large cupola.

The town of Creston had been established, along the railroad, and it was suggested that the county seat be moved. Creston had built a courthouse and offered it to the county. The smaller city of Afton had nothing to offer and so Creston, following an election, became the new county seat on November 25, 1890. The $22,000, two-story courthouse was used until 1951. At this time the city and county joined forces to erect a modern office building. This $300,000 structure is constructed of concrete and faced with limestone. It houses both the municipal and county offices. (Source: e-referencedesk.com) (Picture Source: flickr.com)